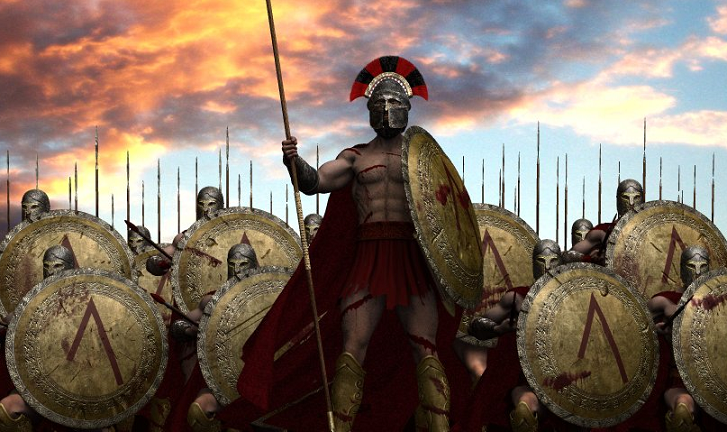 What we are going to talk about today is the concept of persistence. We are going to talk about the concept of persistence in the road to victory. Now it would be great if victory was simply attained by some brilliant idea that immediately produced total success, but that’s not a realistic point of view. Sometimes it does. But that’s not normally the situation. In a world that’s as screwed up as today’s world there's going to be setbacks, big setbacks. So what to do? And what is the appropriate psychological approach to setbacks? Is it to panic? Is it to give up and surrender? Obviously these are not realistic ideas.

THE KEYS TO WINNING IN WARFARE:

The ancient Spartans had a slogan for their soldiers. "Come back with your shield or come back on it." For those who don’t understand ancient war, here’s the point, the shield was very heavy. So if things aren't going well, the logical thing might be to throw down your shield and run because you can't run very far with a great big heavy shield. However, this was generally a road to suicide because the minute the soldier broke out of the flanks and threw down his shield he would be cut to pieces and that’s a highly relevant point that the soldier was to maintain his position in the flanks no matter what. It didn’t mean that victory was guaranteed. It didn’t mean that the soldier might not eventually be annihilated, but the idea of running away and breaking the flanks meant defeat for the entire organization, the entire nation and so on.

Sun Tzu, the Chinese military theorist, mentioned that the road to victory is in the mind. If you can convince the enemy that it’s hopeless you have already won the war. And see, all these things are connected into a state of psychology.

So let’s let’s get a little bit more specific. What do you do if things go disastrously wrong? Well obviously you first need to just survive whatever the respective disaster is and make decisions relating to survival. Obviously that’s necessary, however you must also analyze how you got into the situation and correct whatever you’re doing in life that led to the situation. However there’s a more important point. You need to maintain your position.

The concept of persistence is directly connected to a disciplined lifestyle. It would be wonderful to suggest you could party away, amuse yourself and have a "great time." Work hard play hard. That sort of nonsense. But these are delusions of the current society. These are not realities of a world in crisis. And you have to have a disciplined lifestyle. In other words, do not engage in heavy consumption of alcohol, illegal drugs and even legal drugs are a very big question. The mind altering drugs sold by the pharmaceutical industry can potentially have negative consequences depending on what the person is taking.

It also involves basic questions of health. Getting enough exercise. Getting enough sleep so that your life has the kind of shock absorbers that are needed to survive disasters.

THE TRIUMPH OF HOPE

And it goes back to hope. You see, the enemy wants you to give up. The enemy wants you to think well it’s hopeless. They want you to think it's hopeless to resist, and to learn to love your chains. They want you to think that there’s nothing you can do aside from accepting what is happening to you. That is a road to defeat and disaster. That is the road to being a slave. And in today’s world, the money lords simply have created a world that’s going to self-destruct. So you really aren’t going to save yourself by capitulating to them. No you’re not. That’s not really a solution. So there has to be the concept of discipline and you have to regroup and keep going.

You can look over and over again in history for lessons about persistence. The most spectacular case of persistence is Rome in its battle with Hannibal. Hannibal destroyed one major Roman army after another. Logically one should have just given up and should’ve just surrendered. It was just hopeless. But the Romans were very tough characters and after each defeat they still managed to regroup and reorganize and they eventually wore Hannibal down and they eventually ended up annihilating him. So there’s a lesson there.

Frederick the Great in the Seven Years War is another example of that. After the Battle of Kunersdorf it really looked like things were hopeless. But Frederick the Great kept on fighting. Kept on doing what he needed to do and he was saved by a miracle, the death of Czarina Elizabeth.

Now were not saying that everything’s going to have a happy ending for you. You may follow all the advice in this lecture and may yet end up being annihilated in today’s criminal toxic world. So if you look at history, there is the concept of martyrdom. We believe in the concept of Dharma and Karma. We believe in the concept of life after death. We believe in the concept of there being a long-term future. These are ideas that are thousands of years old and are reflected in different forms in different religions. We're certainly not saying all religions are the same. They are not. But there are overall concepts about this. So you may end up being a martyr, however, running away and panicking is a virtual 100% road to suicide. You see so you have to have persistence. You have to have the psychology of staying power and regrouping after disasters. That’s just a basic fact. It’s a fact that relates to today’s world. We are involved on this planet in a struggle for survival. We have a toxic criminal system and we have to fight back. The ultimate resolution of these problems is not going to be pretty, no it is not and it’s going to involve a tremendous struggle between the forces of life and the forces of death.

So they’re going to be setbacks. There are going to be big setbacks. The victors will be the people who have the 'will to power.' The victors will be people who have the internal discipline. The victors will be people who are able to recover from disasters, regroup and reorganize and keep on fighting. You have no choice. Ultimately the status quo is a death pact that’s not going to have a happy ending. Doing nothing is not an option. So you need to look at your life and reorganize your life so you can survive the setbacks and the potential disasters to come and rise above them just as the Romans did in destroying Hannibal. That’s the end of this lecture