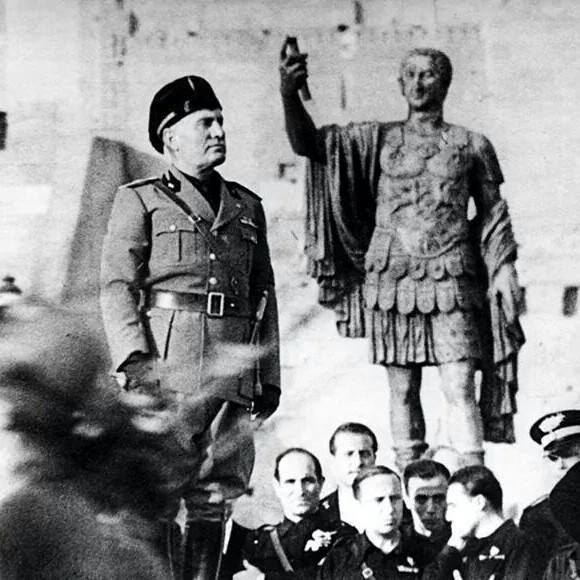 By the spring of 1941, Fascism had become the dominant political ideology on the planet.  Continental Europe (with the exception of Switzerland and Sweden) was under direct fascist control from the Straits of Gibraltar, to the North Cape of Norway, to the island of Crete in the Mediterranean; a European fascist empire had been created. Plans were put forth for a European common market, a predecessor of today's EU. In the summer of 1940 Goebbles had the German Fraktur script, a Gothic kind of script which was the main text of German newspapers and books, changed to the Western Roman script, so that this would be the basis of a more international empire.

FASCISM AMONG ARABS AND INDIANS

What is less well known is the huge popularity of fascism in what is known today as the Third World. To be specific, the Arab independence movements saw Nazi Germany and Fascist Italy as a model for their struggle for independence against British and French imperialism.

The single most prominent Islamic leader, the Mufti of Jerusalem, moved to Berlin to meet with Hitler and direct a global campaign of Islamic liberation.

In India, Nazi Germany's victory over France was hailed as a great triumph by a good part of the Indian independence movement. Subash Bose, who was at one point the number two leader in the Indian Congress party, had sided with Germany and was beginning to organize an Indian independent Army to liberate India. Bose would later meet with Hitler in Berlin. Today he is seen as a national hero of India and it's very, very important to understand that there are close links between the modern Indian nationalist party, the BJP, and its predecessors in the 1930's who enthusiastically supported Nazi Germany. Also, as we have discussed, the Nazis saw their ideology as coming from ancient India.

Still more significant is the fact that Hitler greatly admired Islam and discussed that in his conversations and probably Himmler's favorite division in the Waffen SS was the Handschar division of Muslims. He was particularly proud of that. So there is a larger ideological affinity here.

Perón, who would later become in charge of Argentina, was tremendously inspired by fascism. He had served as a military attaché in Rome during the 1930's, personally observing the success of Mussolini's regime.

FASCISM IN THE EAST

In the East Japan had conquered a good part of China and the number two man in Chiang Kai-shek's government had defected to set up a Chinese government in support of Japan. A million Chinese troops fought on the Japanese side and though the Japanese did a very clumsy job of it, they presented themselves as liberators against Western imperialism and future leaders of the independent Third World such as Sukarno in Indonesia enthusiastically supported Japan.

So this was a global movement. Of also great significance is the fact that Chiang Kai-shek in China was also a huge admirer of fascism and it was a terribly embarrassing situation during the middle of World War II where he published a book called "China's Destiny" which openly admired the fascist system of government.

So this was a global movement. This is a movement of enormous significance. Now the defeat of Germany and Japan by England, America and the Soviet Union in 1945 ended this dominance of fascism, of world political ideology for the time being. It did. And perhaps the critical error (and historians will debate this and we certainly can't resolve this) that Hitler made was not coming to an agreement with Stalin, who was quite interested to come to an agreement with Hitler.

The disastrous visit of Foreign Minister Molotov with Hitler in November 1940 is a very fateful moment. It is very important to understand that the defeat of Nazi Germany was primarily due to the fighting done by the Soviet Union, they did most of the fighting, so you need to sort of filter out all the nonsense that America did 90% of the fighting. That is just that, nonsense.

THE EVOLUTION OF COMMUNISM INTO FASCISM

Now Mussolini was very sympathetic to communism and he felt that the Soviet Union would evolve into fascism. In our time we've seen such an evolution in the form of what is happened in what is still called communist China, but really ought to be called Neofascist China, where the emerging superpower is a fascist state.

Meanwhile things are not going well in the world of democracy. Democracy is totally failing to deal with the global environmental situation. The system that it has imposed on the world is a system of mass suicide, a political economic version of Jonestown. So this is not going very well.

Meanwhile the leaders of the so-called democratic state are adopting the tactics of fascism to keep themselves in power. In America Bush and Obama have endorsed policies of imperialism abroad and totalitarianism at home, and we have documented the details of that on our website.

THE HYPOCRISY OF TODAY'S WORLD LEADERS - THE "NICE" MASS MURDERERS

So while there is an outward talk about democracy today in our world and parliamentary democracy, there is an overall mega trend towards fascism.It's not called fascism because fascism got a rather bad name from The Holocaust and so on and so forth in its defeat, and of course history is written by the victors. The mass murder of the Native Americans is not seen as big deal in America, or treated as such, because the natives ended up on the losing end of that version of genocide. In fact, Hitler based his campaign of genocide against the Slavs and the Jews, on the basis of America's campaign of genocide against the Native Americans.

The tactics of the Allies in World War II were hardly any shining example of morality. The deliberate mass murder of German civilians and priceless cities of art by the mass murder from the air, the deliberate incineration of entire cities was by any standards a war crime. I mean it's ludicrous to suggest otherwise

Since World War II we had a whole new series of war crimes by America such as the wholesale mass murder of civilians in places like Korea, Vietnam, Iraq and so on. So again, this is not a very happy situation, but you have to understand that history is written by the victors and so what is and is not a war crime is dependent on who's in power, and in today's world you probably have the greatest level of international hypocrisy in terms of America and war crimes the history of the world, but this will not last. This is not going to last and as we look at the world today, we see a growing struggle among the nations of the world. Russia is not about to be ordered about by America. They're not, and the Chinese are not about to be ordered about by America.

Now a long-term question is the relationship between America and Europe and the fact that you have a whore, an American stooge, Angela Merkel in Europe at the moment.

THE NEW FASCISM - WHICH IS FASCIST IN ALL BUT IN NAME

Where that leads, that's unclear, but it's very unlikely that Europe will want to stick with America in the long-term, particularly when the whole hyper bubble explodes. So what we have - what will not come back is racial and anti-Jewish views of Hitler, which were not exactly part of Mussolini's fascism to begin with.

But some kind of fascism is coming. It's already here. It's not a question of if its coming, it's already here. It's just not called fascism and as in the failure of democracy and ancient Greece and Rome, you are going to have a movement towards totalitarianism in terms of dealing with a crisis that is actually worse than the mess created by democracy in Greece and Rome.