We are going to discuss the totalitarian revolution in ancient Rome that led to the suicide of the Roman Republic and the transition to the Roman Empire. Part of the problem in understanding ancient history is the effort by political forces in the modern West to reinterpret and sugarcoat aspects of ancient history to prop up their own political situation. The Roman Republic was a very brutal affair. It was a ruthless militarist state that set up the largest slave trade in the ancient world. As it evolved it became mired in increasingly bloodied aspects of class warfare. So it was really not all that happy of a situation. It also committed one of the most appalling war crimes in the ancient world: the destruction of Carthage. We are obviously not going to judge the whole Roman Republic in this article. But what we're going to discuss is how it committed suicide, and the key point about committing suicide is the body of class warfare inside the Roman Republic itself. We are going to concentrate on the final years of the Republic in which Caesar eventually ended up overthrowing the whole system.

JULIUS CAESAR AND THE TRIUMVIRATE

It is important to understand that Caesar was a man of the political left. He was sort of the Bernie Sanders of the late Republic. He is often portrayed as a man of the right in U.S. history, but this is absolutely incorrect. The opponents of Caesar, people such as Pompey and Cicero, could be compared to the modern plutocrats in today's America. There is a very important analogy in this situation. Now we're not going to go into all the "ins and outs" and all the bloody different kinds of class warfare that took place, but we are going to discuss how the Republic ended. We are going to discuss the triumvirate between Pompey, Crassus and Caesar. Crassus was a man of incredible wealth, who bought huge levels of interest in ancient Rome. Pompey was a military and political leader. And Julius Caesar is the military leader who would eventually overthrow the Roman Republic itself.

These three men together created a very unstable government.

Caesar was seen by people such as Cicero as the new Marius, Marius being the leader of the populist left-wing forces in Roman history. That's where he came about. Now Caesar went off to Gaul (58-54 BC) where he won a series of very bloody, but spectacular military victories, and became very popular with the Roman people. Crassus, sort of like today's liberal Democrats who want to prove they're "tough on defense," decided he was going to prove he was tough with Parthia and launched a great military campaign to seize part of Parthia. It is important to understand that the wealth in the ancient world was in the East, it wasn't in Rome. So this was a very logical thing to do and the great dream of all the Roman leaders was -- in the end -- to re-create the empire of Alexander, knockout Parthia, and create an empire that would stretch from the Atlantic all the way to the Indus, in India.

Unfortunately Crassus was incompetent and didn't really do a very good job. He led his army into a military disaster and was eventually killed. So the wealth of the team was removed from Rome's three-person. This left Pompey and Caesar. The geniuses in the plutocratic elite came up with a plan to get rid of Caesar. As Caesar returned from his very popular conquest of Gaul they requested that he give up his military command. Again, the modern Western interpretation of the whole situation is biased. Because what isn't explained in history classes is that this was basically a death sentence for Caesar. Caesar had no illusions about kind of people he was dealing with. If he gave up his army, he was going to end up being executed by Pompey and his plutocratic allies. So it was not very smart of the plutocratic elite in ancient Rome to make this demand, because they basically backed Julius Caesar into a corner.

We believe that Caesar would probably have been willing to work something out once he got back to Rome under more reasonable circumstances. But the plutocratic forces at work in Rome believed that they could order him around, and basically order him to commit suicide. So Caesar was basically forced into attacking the Roman state. The so-called "crossing of the Rubicon River" with his army to take on Pompey was basically the beginning of the end of the Roman Republic. Pompey and his plutocratic allies fled town, and Caesar took over Rome.

Caesar launched what was in effect a direct assault on the structure of the Roman Republic. While dictators had been appointed in times of war in the past, no one before Caesar had just totally upended the whole system and appointed himself as ruler. This got a lot of people very upset. Now Pompey fled to Egypt and Caesar pursued him there. The Egyptian government was probably rather clever, if not ruthless, and they executed Pompey and presented his head to Caesar. What followed this is a very romantic, superficially romantic and colorful series of events. Caesar became intrigued with one faction in the Egyptian court headed by Cleopatra to take over Egypt. Many historians have seen this as completely absurd because they believed that Caesar really needed to get back to Rome and solidify things there, and we're not sure that we can resolve this issue. However, we will say that there was a certain amount of logic in what Caesar did, because Egypt was incredibly wealthy and it was also the breadbasket in terms of food for the Roman people.

When Caesar came back from Egypt, he got ready for an enormous military campaign. Again this shows the Eastern focus of Roman power to reestablish the empire of Alexander the Great. And again, people criticized him for not staying in Rome and obviously not having better security, but he still set out to conquer the East. The upper classes then concocted a conspiracy to murder Caesar with themselves serving as the murderers, which is what happened. Yet they didn't have a backup plan for what was supposed to happen once they murdered Julius Caesar. They were completely disorganized and what emerged was a political civil war, particularly with the popularity of Caesar and the great oration by one of his generals Mark Anthony at his funeral, etc. So this led to a civil war, a civil war in which the conspirators and the upper classes ended up on the losing end due to their own incompetence and stupidity. So we're not going to get into all the intrigue of what happened.

Mark Anthony then set himself up in Egypt with Cleopatra. Now he was then accused of trying to set up a separate state there, and again we're not going to get into all the details of this. And Augustus Caesar, the adopted son of Caesar, was able to mobilize the Roman's in the West, get himself appointed leader, finished off Mark Anthony and Cleopatra, and create a unified empire.

AUGUSTUS SUBVERTS THE REPUBLIC IN THE NAME OF "SAVING IT"

Augustus was a very clever man, one of the most extraordinary figures in world history. He created a working relationship with the plutocrats in Rome, and what he basically did was similar to Bush and Obama today, which was to subvert the system, to "save" the Republic by dismantling it. The folly of Julius Caesar was that he had tried to directly attack the system. That turned out to be a suicide mission. What Augustus did was to basically subvert the Roman Republican system. His big slogan was "the Republic restored," and that he was getting back to traditional values, and so on. He was also the sort of the first great multimedia politician of the ancient world. He had poets cheering him on, such as people like Virgil.

So he set in motion a legal revolution which completely destroyed the Republic, but he did so under the guise of protecting the Republic. It was one of the most brilliant moves in history and created the Roman Empire. Long story short, when he died the Republic was dead. The Empire had been created. And an interesting point is that nobody afterward ever really made any serious effort to revive the Republic because it had so completely discredited itself by its behavior. 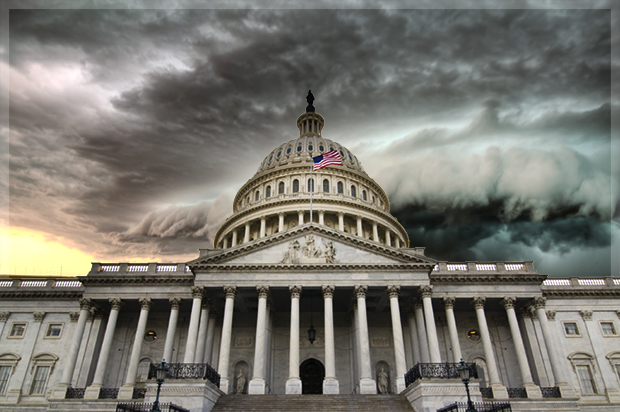 So that was the end of democracy in Rome and that was a very defining moment in Western history. The system of Republic ended up being such a mess, that it basically ceased to exist in the Western world until romantic idealists in the 18th century brought back the concept into our time. The lessons are highly relevant for today, because the money lords really were not fit to rule and the whole concept in modern America, this unholy alliance between the money lords, the liberal establishment and the forces liberal imperialism is not a tenable situation. It is not going to work anymore than Crassus's military campaign worked back in the ancient world.

So the lessons are here, and so are the trends in America. History does not repeat itself exactly, but it does tend to repeat itself. We see the trend of subverting democracy in order to create an authoritarian state. That is the momentum. As we have discussed on other reports with the current environmental disasters and so on. Today it is possible that the transition to authoritarianism is going to be far more bloody than it was in Rome. This can be a far bigger death toll. Read our further reports to get a better understanding of this.

Quotations on the Caste System in Ancient India