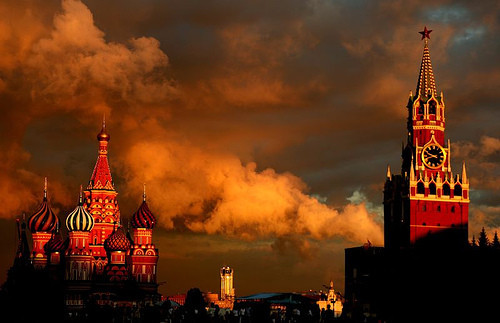 Russia is not like any other country in the world. Russia today has a nuclear arsenal which can reduce the United States to a heap of radioactive rubble in about half an hour. This is an overwhelmingly significant point that should never be forgotten. Thus, U.S. Russian relations are of the highest importance. It doesn't mean that America should back down if there's irresponsible Russian behavior, but it should remind policymakers in both Moscow and Washington that it's important to manage the relationship to avoid a total catastrophe that will end life on this planet.

Crimea has been a historic part of Russia. The notion that Crimea is part of Ukraine is utterly ludicrous. And Crimea is essential to Russian security. No we are not going to get into all the details of who's right and who's wrong in the disputes between Ukraine and Russia. Both sides have some very legitimate grievances. We have both Russian and Ukrainian friends. We do. However we have to look at the overall picture. Ukraine is essential to Russian security is not essential to American security. And we don't see a logical endgame from America's current very confrontational policy to Russia. Does anybody in America really think the Russians are going to give back Crimea. They're not. So what is the endgame? It's not clear. We have a proposed endgame, which is an internationally supervised plebiscite for Ukraine where the parts that might want to join Russia could join Russia. The parts that want to stay with the very artificial state of the Ukraine can stay there. That's our proposal. If anybody has a better proposal that works we'd be glad to support it.

THE DANGER OF WAR

It's very important to understand the danger of war here. In 1914, all the leaders of Europe knew that the outbreak of war would be a total catastrophe. And yet World War I began, and set in motion a chain of catastrophic events for life on this planet. One of the most important events of the last 20 years, which is really not widely discussed in America, even though it's of enormous significance, has been the expansion of NATO to the east in total contradiction to what the Russians were promised when they agreed to evacuate Germany and Eastern Europe. And yes, this was specifically promised even though Americans have tried to pretend it wasn't. It was. The facts of this matter are hundred percent clear. The end result is that NATO is now directly connected to some of the most sensitive parts of Russia. This is particularly true of the Baltic states, which are very close to St. Petersburg. These are essential Russian security interests and American people do not fully understand that NATO is a legally binding military alliance. Any conflict along the borders with Russia will trigger war with Russia. That's what NATO means. So people who say over everybody's going to be so smart and so clever that this won't happen. That's very fatuous and very dangerous thinking.

Now the whole situation gets worse and that America is building an anti-ballistic missile site in Poland. Now with the technology, these missiles sites can also launch long-range cruise missiles to attack Russia. The tubes will handle both ABM missiles and cruise missiles. This is a highly provocative move and moves the world closer to a nuclear hair-trigger. In the study of war, you must understand the concept of national prestige. Countries go to war because they feel their prestige is threatened, or they feel they have to keep a commitment. This was the genesis of the catastrophe of 1914. And NATO, again, is a legally binding alliance. The United States is committed to going to war if fighting breaks out, for instance, between Latvia and Russia. It is. Now how many Americans of ever even heard of Latvia? Hardly any. And the expansion of NATO to the Baltic states under George Bush was an issue that was not really discussed at all in Congress, but is of an enormous long-term historical significance.

There's also the economic factor. The Western economies are not in good shape. They still haven't fully recovered from the economic disaster of 2008. Whole new piles of debt have been run up. Huge amounts of funny money have been printed. And this is also a serious situation. The last thing anybody needs is an increased huge arms race draining money out of the economy. Also the world trade economy as we know it requires the free flow of capital and relatively good relations among all nations. If America is going to start seizing other people's money right and left to back up its political points of view, this is going to cause people to pull out of the world economic system.

Still another problem that's occurred is that Obama's confrontational approach to Russia is driving Russia into the arms of China, because Obama is also adopting a very confrontational approach towards China's actions in the Pacific and the South China Sea. The Russians and the Chinese really don't like each other. They have a long history of border conflicts. But Obama is creating a Russia China axis which could also be very damaging in the long run. So all these are extremely negative events. What is the solution? The heart of the matter is the Ukraine situation. The Ukraine situation needs to be resolved and the sanctions against Russia need to be lifted. Is the United States going to blow up the world in a dispute over Ukraine? The state of Ukraine is a complete mess and so do we want to destroy the world because of Ukraine? That doesn't make a whole lot of sense. It really doesn't and the Russians have shown they are willing to negotiate, America has not shown it's willing to negotiate. That situation needs to change. The Ukraine situation needs to be resolved. There is also a dispute in Syria. Syria is a much more complicated situation because you have a whole series of other actors involved such as Saudi Arabia, Turkey, and so on. But actions also need to be taken there to work towards a peace or some something that at least looks like peace.

LOOKING AT THE BIG PICTURE

The big picture here is that Russia must be integrated into a world system of security, and again, this doesn't mean that America should tolerate outrageous Russian behavior. But far more efforts should be made to resolve the situation and bring Russia back into a cooperative system of security. That's the bottom line and failure to do so has the most ominous dangers for America. Things escalate. Things get out of control. One action leads to another action. That's the lesson of history. Those who oppose these policies should understand that they are pushing the world towards nuclear war. That's what they're doing. And even if that doesn't happen a conventional war would be horrendous and a new huge arms race would have devastating consequences for the world. So all these things are very negative and very dangerous. Thus Russia and America should have incentives to negotiate. The problem is America. It's not Russia. Putin has shown himself to be very flexible to negotiate. America now needs to show that it is flexible to negotiate and bring this crisis to a conclusion. That's the end of this lecture.